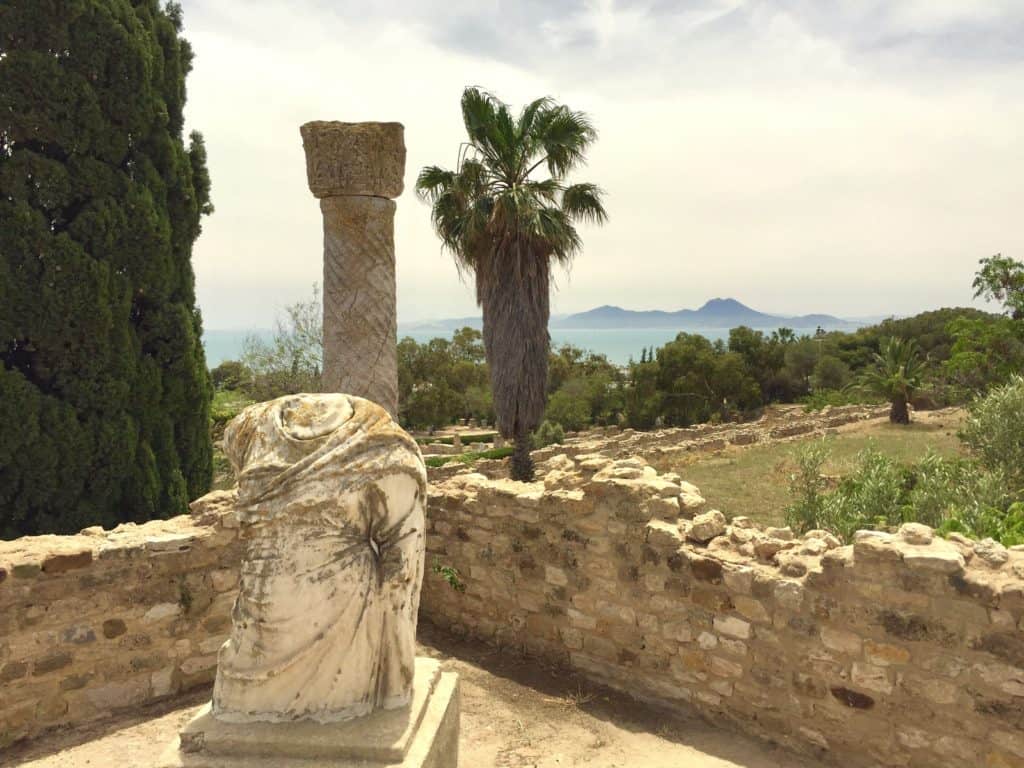 2 Comments on Two Days in Tunis – An Itinerary to Explore the capital of TunisiaPosted in Tunisia By 197travelstampsPosted on April 22, 2018November 3, 2019Tagged Itinerary, Travel, Tunisia

I didn’t have any high expectations before visiting Tunis for two days last summer. Before deciding to travel there, I haven’t heard much about it as a tourist destination. I’ve met many people who have been to the famous package holiday areas of Djerba, Sousse and Hammamet in the south of Tunisia but nobody who has actually visited its capital. But I was absolutely amazed after my visit. During our two days in Tunis, we visited the Medina (old town), Carthage, the former capital city of the ancient Carthaginian civilization, and Sidi Bou Said, a picturesque blue and white village.

Since this is a rather detailed post, I added a table of content for faster navigation. It also gives a quick and good overview of the two day Tunis itinerary.

Day 1 Morning – Exploring the Medina of Tunis and Kasbah Square

The entire inner city of Tunis is surprisingly small and walkable. The absolute center and main tourist destination is the old town, called Medina. The Medina is the oldest part of town founded in 700 AD and has been a UNESCO World Heritage Site since 1979. But don’t head straight to the main tourist sights of the Medina. Take your time for a stroll through the small alleys without looking at the map beforehand. Just go with the flow, wherever the local traders and market visitors take you. You will walk past small mosques, madrasas (Quranic schools) and picturesque little backyards. Don’t forget to take plenty of photographs.

Seing the Medina of Tunis from Above

As you walk around the Medina of Tunis, you will most likely be approached by seemingly friendly locals who want to show you a terrace from where you can see the Medina from above. This sounds tempting but I would advice you to say no to any such offers. If you agree on following someone, make sure to agree on a price beforehand. If you want to visit a viewing platform, make clear what you want and how much you will be paying. Otherwise you may end up getting a tour through the entire Medina or a very expensive view. Our hotel, the Victoria Hotel, let us visit their rooftop terrasse since we asked for it. Consider asking your hotel as well if they have a rooftop if it’s close to or inside the Medina for a great view.

The Zitouna Mosque was built in 732 AD and is the oldest and largest mosque in Tunisia – an absolute must on every Tunisia travel itinerary. Until recently, the viewing platform of the mosque was accessible for non-Muslims but unfortunately this is not the case anymore. As a non-Muslim, you can only explore the mosque from the outside. If you aren’t there on a Friday, you can try to enter the beautiful courtyard of the mosque.

The Souq in the Medina of Tunis

You’ve probably already come across it during your stroll. When you enter the Medina through the French Gate (Port de France), you will already hit the start of the souq which drags through some of the main streets of the old town. The main area of the souq where most tourists wander through may not look very inviting. The goods you can buy here are probably just imported from China and aimed at tourists. But if you dig deep enough and if you are willing to walk off the main paths, you can find some amazing spots here where locals buy their goods.

The Government Buildings of Kasbah Square

Once you leave the Medina through the Western Gate, you will find yourself on an impressive square: Kasbah Square. It was built to impress as it holds most important government buildings.

Since you’ve probably done a fair bit of walking in the Medina in the morning of your first day in Tunis, the afternoon program is a bit more relaxed. When you leave the Medina through the French Gate (also called Bab Bahr in Arabic), you will find yourself on the Avenue de France. The beautiful avenue is lined with beautiful buildings from the French colonial era. Here you can enjoy a cup of coffee or a refreshing drink in one of the many cafes while watching the busy life of Tunis pass by you. Make sure to take a look at Cathedral of St. Vincent de Paul. The cathedral was built by the French in 1882 and remains the largest colonial building in Tunis.

If you still have some energy, head to the Bardo Museum. The museum covers the history of Tunisia from the beginning of mankind until the Ottoman period in the 14th century.

Day 2 – A Visit to Carthage and Sidi Bou Said

On the second day of our short Tunisia itinerary, we visited the ruins of Carthage and the wonderful village of Sidi Bou Said. Carthage is the former capital of the Phoenician empire and home to the infamous Hannibal. Sidi Bou Said is a village with stunning white and blue houses and breathtaking views over the Mediterranean Ocean.

Carthage and Sidi Bou Said are both still part of the Tunis Metropolitan Area and are located around 20 km from the city center. It is possible to reach both destinations after a short 20 minute ride with the TGM light rail (fare is around €1). But taxis are so cheap that I wouldn’t recommend the train if you only have 2 days in Tunis. As long as you insist that the driver turns on the meter once you enter the taxi, the 20 minute ride from your hotel in Tunis to Carthage will cost around €6.

What to see in Carthage in half a day?

Carthage was the center of power of the Phoenician Empire that ruled the entire South Mediterranean area. Already in the 6th century BC it had a population of around half a million people. In 146 BC, Carthage was completely destroyed by the Romans who later rebuilt the city and made it the capital of their North African Empire. So the answer to the question what you will see in Carthage is ruins, you will see lots of ruins. UNESCO World Heritage listed ruins.

Depending on your travel style, you can consider hiring a guide to show you around the ruins of Carthage. But you can also visit Carthage independently.

Ask you taxi driver to drop you off at the Antoninus Baths, the largest Roman baths outside of Rome. You can buy a multi-site ticket that includes all 10 historic sights of Carthage for €5. It will be worth it if you visit more than two of the sites. You may be asked to pay a little extra to take photos. In addition to the Roman Baths, you can also see some old Punic houses and graves.

Amphitheater and Roman Villas of Carthage

The Amphitheater is just a short walk away from the baths and can be entered with the multi-side ticket as well.

Right next to the Theater is the archeological site of the Roman villas. This was one of my favorite sights in Carthage. Most tour groups only stop by the baths so there were hardly any tourists exploring the Roman villas while we were there. The villas are still in good shape and they give you a good feeling of how the rich Romans used to live here a long time ago. The scenery of the houses that overlook the Mediterranean Ocean is also very impressive.

Next Stop: The beautiful houses of Sidi Bou Said (and lunch)

After visiting all the ruins of Carthage and learning so much about ancient history it is time for a good an filling lunch. Time to head to Sidi Bou Said. From Carthage, you can take a short train ride but for a two day itinerary for Tunis, I recommend taking a cheap taxi again. The ride will only take a couple of minutes and cost less than €5. Hop into any of the inviting restaurants to regain some strengths before exploring the incredible beauty of Sidi Bou Said.

One of the photos I took in Sidi Bou Said made it into my top 10 travel photos. Check out the other photos from around the world by clicking here.

All the houses are painted in blue and white and are often decorated with colorful flowers. The village is small and you won’t need a map or an itinerary to explore it. Just take out your camera and shoot away as you stroll down the narrow, car-free alleys of Sidi Bou Said. This is also the perfect place for souvenir shopping in Tunis. But don’t forget to haggle about prices to avoid being overcharged. Once your feet get tired, head to Café Delices for some incredible views over the Mediterranean Ocean. Drinks are a little pricier here but may be well worth the view. If you are traveling to Tunisia on a budget, you can just enjoy the view from above the café for free.

Where to stay in Tunis?

There are plenty of accommodation options in Tunis for every budget. We decided to stay at the midscale Hotel Victoria right at the entrance of the Medina. And I can absolutely recommend it. The building used to be the British embassy during the French colonial rule and it is an absolute architectural marvel. The inside of the building is decorated in a wonderful Arabic style. Our room had a balcony from which we could overlook the Medina. We paid around €50 per night at the Hotel Victoria. An unbeatable price for a high quality hotel. Check the price for your travel dates here.

Have you already visited Tunis or do you plan to travel there anytime soon? Let us know about it in the comment section.

Do you know what the flag of Tunisia looks like? Test your knowledge in our flag quiz or take our African map quiz and identify the countries on a blank map. If you are interested in more of our travel stories, read about our experiences in Burundi, one of world’s poorest countries on the verge of a civil war.

Pin this article for later: