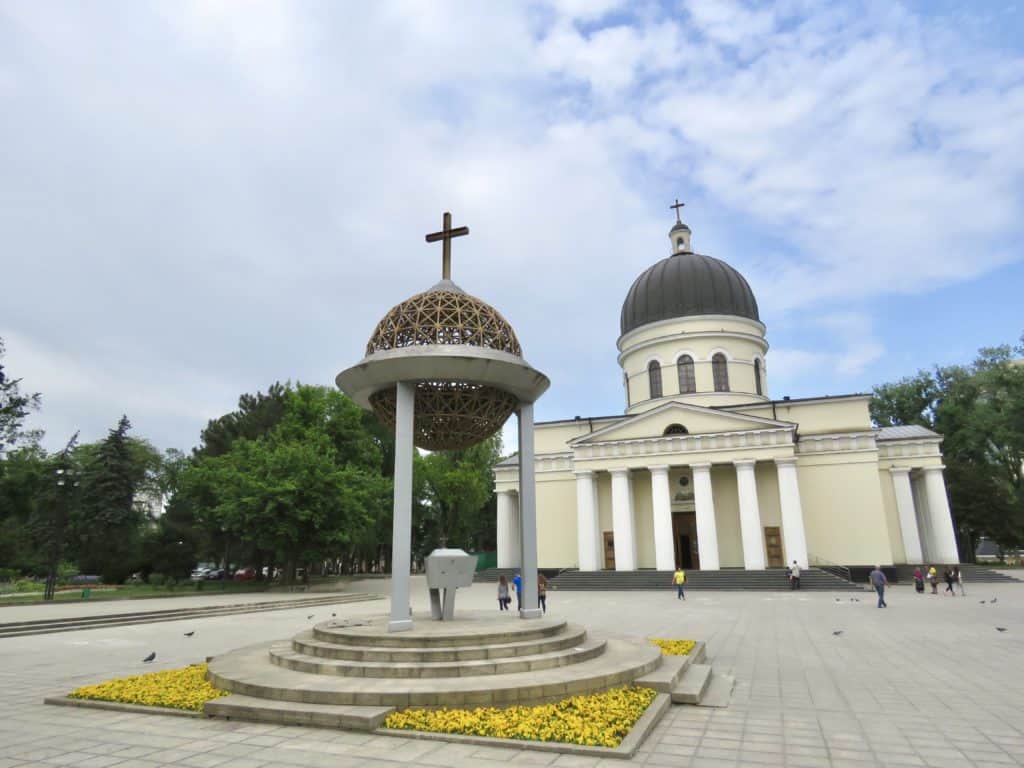 7 Comments on Things to do in Chisinau – Exploring Europe’s Least Visited CapitalPosted in Europe, Moldova By 197travelstampsPosted on May 21, 2018November 3, 2019Tagged Eastern Europe, Guide, Itinerary

Chisinau (also called Kishinev) is the capital of Moldova, Europe’s poorest country. And it is also Europe’s least visited capital. Before traveling there, I expected a run-down old grey Soviet city. But we’ve had some fun times in Moldova and there are plenty of things to do in Chisinau for tourists. The city is full of wonderful green parks, old Soviet buildings, magnificent churches and monuments. Read this post to find out what to do in Chisinau.

Contents
Where is Moldova? Where is Chisinau?
Practical Information
Things to do in Chisinau
Chisinau Nightlife
Day Trips from Chisinau

Where is Moldova? Where is Chisinau?

Moldova is located in Eastern Europe nestled between Romania and Ukraine. Chisinau is the least visited of Europe’s capitals located in the center of Moldova.

Now you can identify Moldova on a map! Can you also identify other European countries on a blank map? Find out now and check out our fun European Map Quiz!

Several international airlines as well as Moldova Airlines, the country’s flag carrier offer flights to Chisinau airport. Low cost airline Wizzair usually offers the cheapest flights to Chisinau. If you are trveling over land, Chisinau can be reached in a three hour ride from Odessa or from Iasi in Romania.

How to get to the city from the airport

The airport of Chişinău is located around 15 kilometers (10 miles) from the city center. The best and quickest way to get to the center is by taxi. Don’t agree on a price beforehand but insist that your driver turns on his taximeter. The ride from Chisinau airport to city should cost you around 100 Leu (€5) and take less than 30 minutes.

Getting around in Chisinau

Most of the places to visit in Chisinau are located on or around Stefan Cel Mare Boulevard and very walkable. For longer distances, you can take a city bus (fares are 2 Lei) or a cheap taxi.

Things to do in Chisinau

The Nativity Cathedral is the main church of the Orthodox community in Moldova. The church was constructed in the early 1800s and partially destroyed in WWII. During the Soviet rule, the building was destroyed again and it was rebuilt in 1997. Unless there is an important sermon going on, you are free to enter the church. Photography is prohibited inside.

Just a couple of meters from the Nativity Cathedral, you can find another one of the main Chisinau attractions: the Arc de Triomphe. The arch was built in the 1840ies after the Russian Empire defeated the Ottoman Empire. The architecture of the triumphal arch was inspired by its larger, and more famous, counterpart in Paris.

Just across the Stefan Cel Mare Boulevard, Chisinau’s main street, lies Stefan Cel Mare Central Park. Take a stroll in the park and watch the locals rushing through. The heart of Chisinau is full of green parks. If the weather is good, grab some ice cream in a nearby store and relax.

Parliament Building of the Republic Moldova

The parliament building of Moldova is a perfect showcase for Soviet architecture. And it is not especially beautiful. But it is well worth a look since it is very close to Stefan Cel Mare Park. During our visit there was one twenty-something year old guard watching the building. We were slightly tempted to take over the country in a coup. But the prospect of all the stress of running a country was to much after all.

On the way from the airport to the city we drove past a beautiful church. Oddly, the church was listed in none of the Chisinau itinerary guides I have been reading before the trip. The Ciuflea Monastery is located in Strada Ciuflea on the southern end of the Stefan Cel Mare Boulevard, the main street of the city. Depending on you location, you can either walk there (the city is not very big), take a cheap taxi ride or ride the local bus. I always like using local transport whenever I travel somewhere new. So we took the first bus in the southern direction in front of the Arc de Triomphe and got off just at the end of the boulevard. The ride costs only two Leu (around 10 Euro Cent) and you can pay the fare inside the bus.

Entrance to the monastery is free. Keep in mind that photography is prohibited inside the church. The locals seem to take their faith rather seriously so it is best to enter the church appropriately dressed.

National Museum of History of Moldova

While you went out of your way to make it to Europe’s least visited country, make sure to learn a little bit about its troubled history. The national museum of history of Moldova will give you some amazing insights into the development of the proud Eastern European nation.
The museum is open Saturday through Thursday from 10 am until 5 pm and it’s closed on Fridays. The entrance fee is a nominal 10 MDL (€0.5).

Prices in Chisinau are very low compared to other European destinations. Therefore, Chisinau, one of the cheapest cities to travel in Europe is the ideal place to live it up a little. Head to the rooftop bar of the Radisson Hotel – the only international hotel in Chisinau. This fancy bar offers incredible cocktails and wines and some amazing views over the city. You will pay around €5 for a high quality cocktail.

Moldova is a small country and most of its main attractions can be visited as a day trip from Chisinau. Here are two popular side trips from Chisinau:

Milesti Micii is world’s largest underground wine cellar and one of the top places to visit in Moldova. The cellars are located less than one hour south of Chisinau. A taxi to get you there from Chisinau and back should cost around €30-50.

Transnistria is a self-declared independent country in the east of Moldova. If you ever wonder what it must have been living in the Soviet Union, go there and you will know it. Nothing seems to have changed in Transnistria in the last 30 years. Tiraspol, the capital, is located around 1.5 hours east of Chisinau. You can get there by bus or taxi. Don’t forget your passport as you will have to go through Transistrian immigration.

I have to admit that I was pleasantly surprised by Chisinau. The city is small and it is easy to see the main sights within a day. All the green parks make it very relaxing to walk around. I guess it depends a lot from the season when you visit as it could get quite grey during the winter months. Thanks to the low prices in Moldova, traveling is easy. We stayed at good hotels, ate at the best restaurants in Chisinau and hired taxis for the rides through the countryside. All at the budget you would spend doing ordinary things in Western Europe.

Do you know what the Moldovan flag looks like? Check out our world flag quiz and test your geography knowledge. If you feel like a flag expert, try our hard flag quiz!

I you have visited Chisinau and know of any other things to see in Chisinau, let us know in the comment section.

Things to do in Chisinau – Exploring Europe’s Least Visited Capital