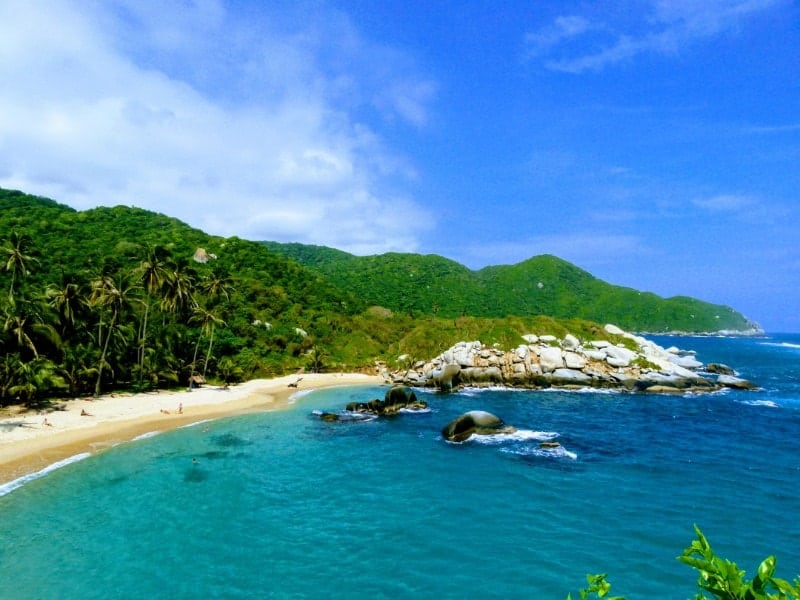 How to get to the Caribbean Coast of Colombia?

Flights to Cartagena de Indias are available from several cities in Colombia as well as from the Caribbean and the US. Alternatively, you can catch a flight to Barranquilla from where you can take the bus to Cartagena.

How to get around?

The journey from Cartagena to Santa Marta takes around 4 hours by minibus. Transportes Marsol offer a door-to-door service which is very convenient since the public bus terminals are very far from the both city centers. Within the cities, you can easily and safely get around with Uber. In case you take a taxi, make sure to negotiate the price beforehand and that it is a registered taxi.

Colombia is considered the second most dangerous country in South America. But over the last years, the safety situation has improved greatly. Nowadays, most areas frequented by tourists, like the Caribbeam coast, are safe to visit, even if you are traveling solo around Colombia. However, you should still be careful at night and not carry valuables in plain sight.

Cartagena’s incredibly pretty, colorful and vivid old colonial quarter is a Unesco World Heritage site. Just stroll around the labyrinth of alleys and small sqaures of the Centro Amurallado (walled city center) to enjoy its charme and marvel at the colonial balconies and courtyards decorated with flowers, impressive palaces and churches. Do not miss the cathedral and pay a visit to the Castillo de San Felipe de Barajas fortress from where you have an excellent view above the city.

Make sure to also check out the street art, authentic food and nightlife of Getsemaní, the outer walled town. There are also many hostels and hotels in this up-and-coming neighbourhood of Cartagena, if you want to have your accomodation close to the party zone.

From Cartagena you can take a day trip to the magnificent Isla Grande or other breathtaking islands of the archipelago Islas del Rosario. Hop on a sightseeing cruise to enjoy the beautiful beaches and snorkle in the turquoise crystal-clear waters.

Santa Marta is an important colonial town on the Caribbean Coast. While the town itself has less touristic sites than Cartagena de Indias, it is the optimal starting point for excursions to the Tayrona National Park and the Sierra Nevada Mountains. If you arrive in Santa Marta in the afternoon before heading off to Tayrona or Sierra Nevada the next morning you will have some time here to stroll around the colonial city center. If you are interested in the history of Colombia, you should visit the Quinta de San Pedro Alejandrino. The building, nowadays a museum, is the deathplace of Simón Bolívar, independence fighter and national hero of several South American states.

Make sure not to miss the town’s delicious streetfood and try the fresh fruits and juices.

Tayrona National Park is a gorgeous piece of land where the green hills of the rainforest meet the golden Caribbean beaches with turquoise blue water. The park is some 12 000 hectars large and there are still several indigenous tribes living in the area. Besides hiking and the beautiful beaches, you can visit Pueblito Chayrama. A small indigenous village where you can learn about the ancient cultures of the area. The village is situated around 2 hours walking from Playa Cabo San Juan, one of the most spectacular beaches inside the park.

The cheapest and most adventurous accomodation option is to rent a tent or a hammock at one of the camping sites in the park. To be honest, sleeping in a hammock sounds more romantic than it actually is. We spent our first night in hammocks at the camping at Playa Cabo San Juan beach. The hammocks (with mosquito nets) are fixed next to each other under a communal roof which may protect from the rain  but not from the humidity in the air. And due to the lack of walls, they are not protected from the local wildlife. In the evening, my hammock was already occupied by an iguana.

A more comfortable alternative are the ecohabs and cabanas in the park like the charming Eco Hostal Yuluka or Tayrona Tended Lodge next to the sea.

Prepare your excursion to Tayrona:

Do you know what the capital of Colombia is? Test your geography knowledge with our South American Capitals Quiz or find a full list of all South American countries and capitals here.

Minca is a small village in the Sierra Nevada Mountains where you can discover coffee plantations, hiking routes, waterfalls, banana trees and other tropical flowers and plants. You can reach Minca by Uber, taxi or colectivo from Santa Marta.

I found Sierra Nevada far less touristic than the Tayrona national park and much more adventourous. We stayed at finca la semilla, a hidden jewel in the middle of the mountains. The Finca can be reached by motor taxi and a 20 minute hike from Minca.

The  Colombian-Swiss dropout couple who runs the farm is very welcoming. They introduced us to their daily life with yoga exercises, agro-ecological work, vegetarian food. The farms doesn’t have any electricity so we used candles at night and enjoyed the refreshingly cold showers with water straight from the mountains. Giuseppe went on a hiking tour with us on which we visited a coffee farm and took a bath in some waterfalls.

Barranquilla is one of the biggest cities of Colombia but far less popular among foreign and domestic travellers. The industrial city is considered to be as attractive as its Caribbean neighbours Cartagena de Indias or Santa Marta. But if you are flying to or from Barranquilla anyway, you may spend a day of your two weeks to experience the joy of life of the Costeños (people from the coast). The “alegria“, openness and energy of Barranquilla’s people is what fascinated me about the city during my two months there. To learn more about the culture of Colombia’s Caribbean coast, visit the interactive Museo del Caribe. To dive into Barranquillero nightlife, check out my favorite spots La Troja, Trucupey, Frogg club!

Speaking about partying, did you know that Barranquilla’s carneval is the second largest in Latin America (after Rio de Janeiro)?

Time left to travel around the Caribbean coast of Colombia?

In the middle of the Sierra Nevada jungle, there are hidden ruins of the Ciudad Perdida, an ancient indigenous town built 800 years BC. Which makes it more than 500 years older than Machu Picchu. The hike to the arcehological site is demanding and takes between 4 and 7 days (depending on the tour booked). It includes more than 40 km walking, climbing, river crossing in the heat and humidity of the jungle. It is not possible to go there without a guided tour.

Read about a detailed experience of the hike to Ciudad Perdida here.

A desert in Colombia? Yes, in Punta Gallinas, the northernmost tip of the South American continent. The sand dunes stretch down until the ocean. Even though the surreal desert landscape is hard to get to, the reward is a real adventure in a place which has not yet been conquered by the tourist masses.

If you want to explore the rest of Colombia as well, check out this two week itinerary. Or if you want to explore different beach destinations, read our guides on the best activities in Boracay Island in the Philippines or the paradise country of Cape Verde in West Africa

Have you been to Colombia? What did you like most? Let us know in the comment section 🙂

Pin this for later:

Explore the Caribbean Coast of Colombia in two weeks