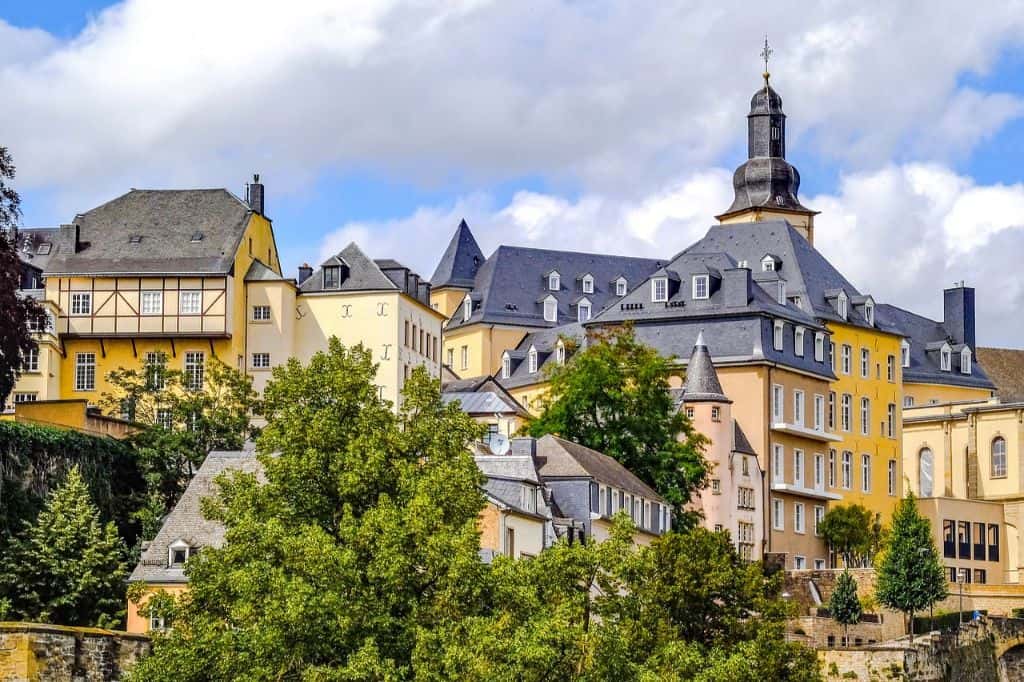 No Comments on The best places to visit in LuxembourgPosted in Europe, Luxembourg By 197travelstampsPosted on September 12, 2019January 29, 2020

Luxembourg is one of the smallest countries in Europe between Belgium, France and Germany. Despite its central location, it often gets overlooked by travelers. However, you may be surprised to find out that despite its size, Luxembourg does indeed have plenty to offer and a stunning natural beauty. Small in size but huge in attractions, Luxembourg is a gem awaiting to be discovered. We will show you the best places to visit in Luxembourg.

Public transport in Luxembourg is very cheap and the bus and train system is very reliable. On Saturdays, public transport is completely free and from March 2020, Luxembourg plans to make the entire public transport system free. However, if you plan to travel to cities like Vianden or Eternach in north of the country (which we do recommend below), renting a car may be a more comfortable way to get around. The distances are generally short and with a car, you are more flexible and not tied to the schedules of public transport. Travelers from the United States can find insurance against rental car damage here to protect themselves against unwanted surprises.

Luxembourg is part of the European Union and the Schengen Area. So there is no visa needed for travelers coming from the United States. Luxembourg has an international airport with a great destination network throughout Europe but few intercontinental flights. So most travelers coming from the US will have to change planes before getting to Luxembourg or fly to Amsterdam, Brussels or other European cities and then travel overland.

Get the Luxembourg Card

The Luxembourg Card offers an incredible value if you plan to travel around the Grand Duchy of Luxembourg or if you want to visit several attractions. The Luxembourg Card includes all travel on public transport throughout the country as well as the entrance to nearly all attractions in the country. Prices start at 12 Euro for one day – multi day and group tickets are also available at reduced rates. You can book the ticket online here at the official website of the Luxembourg tourism office.

The best places to visit in Luxembourg City

One of the best places to start exploring the Grand Duchy of Luxembourg is the Old Quarter in Luxembourg City. The historic center is set in a scenic location on top of a cliff. Despite being small, the Old Quarter contains several UNESCO listed attractions. Some of the must visits are the Place Guillaume, the Grand Duke’s Palace and the Place d’Armes. Back in the days, the Old Quarter was surrounded by graceful ancient fortifications. Now, visitors find tree-lined cobbled streets and beautiful gardens. Explore the winding alleys and scenic bridges. Don’t miss out on Adolphe Bridge and take a look at the charming old homes surrounding it. This area of Luxembourg City is not only absolutely instagrammable but also magic! 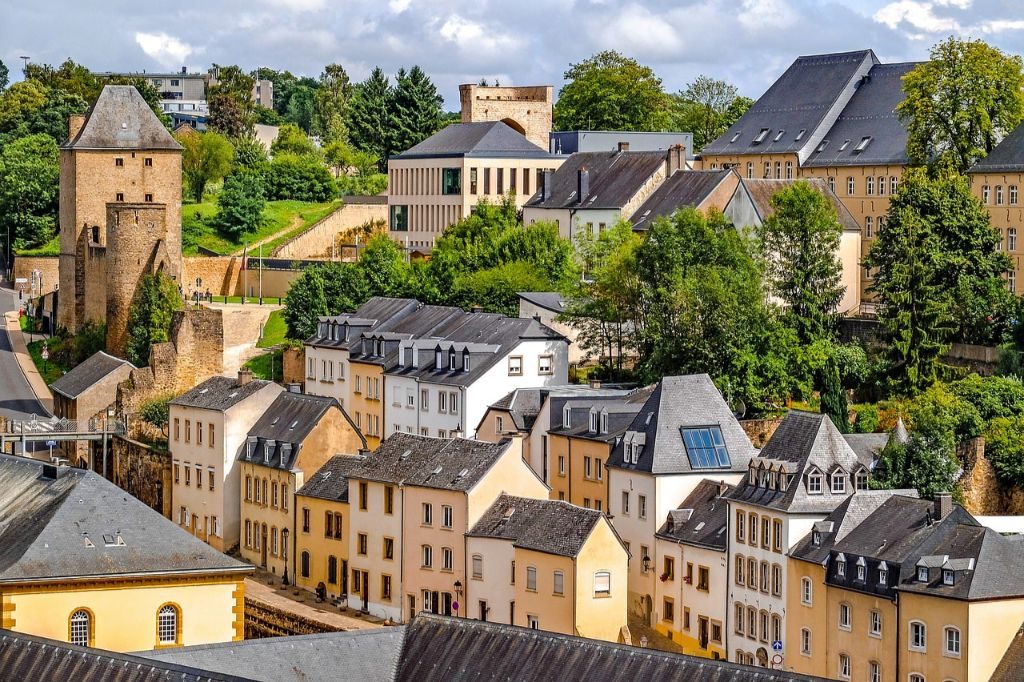 The Grand Duke of Luxembourg and the royal family live in the Grand Ducal Palace, one of the most stunning architecture features in Luxembourg City. It dates back to the 16th century and mixes gothic and medieval designs with romantic touches. 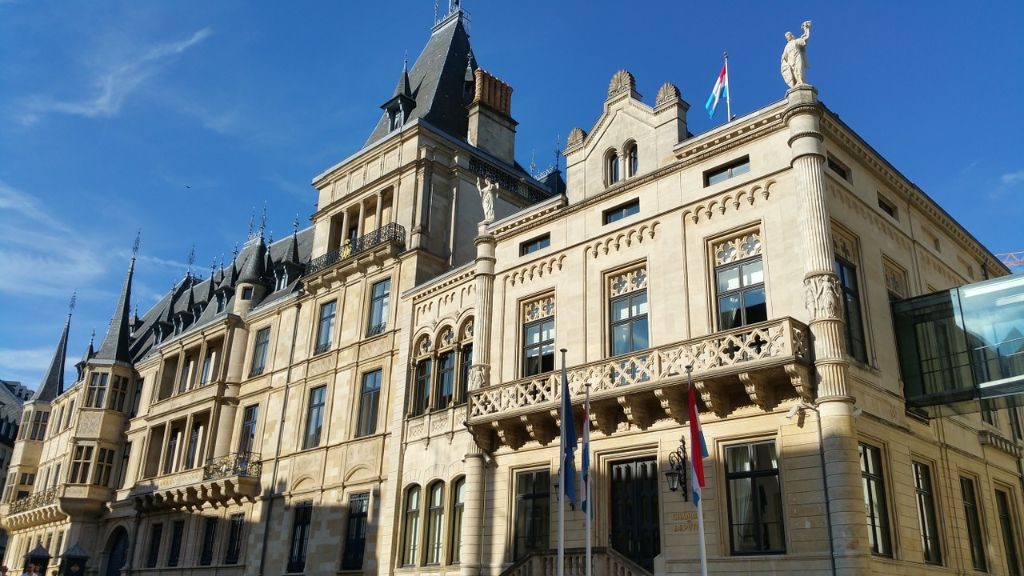 This magnificent palace, with its small turrets and balconies is open to the public from mid-July through early September. Visiting this palace is an opportunity you shouldn’t miss. It’s also one of the best places to visit with kids in Luxembourg City as they will definitely enjoy watching the guards as they do their march along the Grand Ducal Palace.

Be Captivated by the Bock Casemates

Spending some time visiting and exploring the Bock Casemates is definitely one of the best things to do in Luxembourg. Long time ago, Luxembourg City was also known as the “Gibraltar of the North” due to its complex fortification system that was built from 963 AD onwards. After signing a neutrality agreement in the late 19th century, most of the city walls were destroyed.

The basement of the fortress, which extended into the cliff on which the city was built, housed the casemates. Initially, there casemates were constructed as a set of cannon emplacements to protect the city. Over the years, the casemates were connected to a complex set of tunnels that included shelters, stables, storage houses and even kitchens. Their purpose was to help the citizens of Luxembourg City survive attacks. Since the Bock casemates are carved into the rock so deeply, they couldn’t be destroyed together with the rest of the fortress without damaging the foundation of the city. Thanks to that, you can still visit the incredible tunnel structures today.

They are best accessible beneath the former castle Montée de Clausen and they provide stunning panoramic views of the upper city, the Grund, the Corniche Walk and Fort Obergrünewald.

Explore the Grund, the Lower City

The lower part of Luxembourg City, the Grund, has a distinctive atmosphere as it is located at the base of the former fortress surrounding the city. A charming area feeling like a quiet European village. There’s a free elevator not far from the end of the Chemin de la Corniche that takes you down to the Grund. It’s an absolutely charming area that you’ll definitely fall in love with. Despite its relaxed pace, there’s plenty to do! Nightlife is exciting and there are many cafés, fine dining restaurants, cultural venues and places to see. 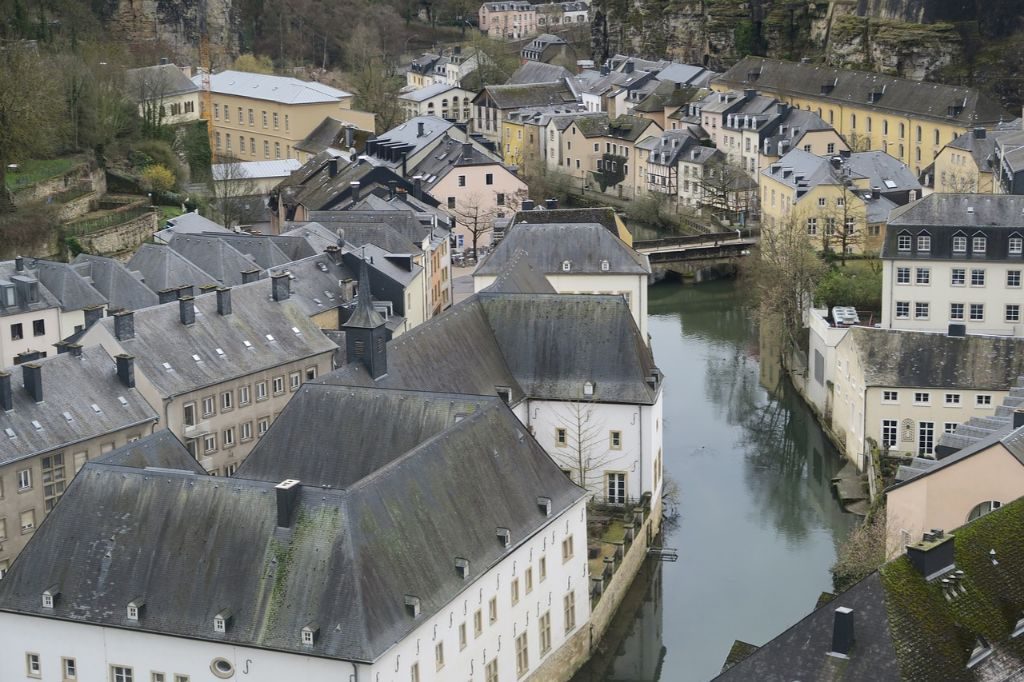 Notre Dame Cathedral is the most important church in Luxembourg City and a must-see even if you’re not a religious person. The cathedral was built in the 17th century and features an eclectic architectonic style that includes Neo Gothic and Renaissance elements. The nave is airy and there’s a wonderful stained glass that lets the sunshine in. The interiors are exquisitely decorated. There’s a miniature Madonna and Child altarpiece and a crypt where members of the Luxembourg Grand-Ducal Family were buried.

Admire Art at the Museum of Modern Art MUDAM

Luxembourg’s MUDAM is located on the walls of Fort Thungen, overlooking the Old City. The museum sprawls over 4,500 meters and is the home of an eclectic range of art that includes photographs, textiles, sculptures and even digital media. The entire museum complex sits in the Parc Drai Eechelen. The park itself is also worth a visit since it offers an interesting array of sculptures and sweeping vistas of the Old Quarter. The MUDAM hosts internationally renowned collections and exhibitions. Visitors can appreciate works by Andy Warhol, Hilla Becher, Blinky Palermo or Julian Schnabel. The museum provides a free coat check and WIFI.

The National Museum of History and Art is another cultural venue that is an absolute must-visit in Luxembourg City. It showcases a large archaeological collection that includes tools, coins, sarcophaguses, jewels and other elements found during excavations in Titelberg and Dalheim.

There’s also a wide range of Luxembourgish paintings including Nico Klopp, Jean-Pierre Beckius or Dominique Lang. The National Museum of History and Art in Luxembourg City also houses ancient sculptures and paintings and work focused on the Gallo-Roman era, displaying numerous pieces that illustrate the social, religious, artistic and intellectual life of Luxembourgers from the 16th to the early 20th centuries.

Stroll Along the Walls of the Corniche

The spectacular Walls of the Corniche of Luxembourg City (le Chemin de la Corniche) are known as the most beautiful balcony in Europe as they tower over the Old Quarter and the river valley below. Here, you’ll find the big Gate of the Grund, which dates from the early 1630’s, the ancient St Michael’s church or the Abbey of Neumünster (famous for its 18th century organ and its black virgin).

The Walls of the Corniche is a pedestrian promenade that winds along the course of the 17th century city ramparts. It is the place to take Instagram-perfect pictures of Luxembourg City. One of the coolest spots to do in Luxembourg City!

Vianden and its Beautiful Castle

The scenic town of Vianden is famous for its feudal manor dating back to the 9th century. The town is surrounded by a medieval outer wall with guard towers. Literature lovers will love to know that Victor Hugo lived here during his exile and his home is open to the public.

Vianden is a quaint, hilly town on river Our, in the Northeast of Luxembourg close to the border with Germany. Vianden Castle is one of its most important highlights but you shouldn’t miss some of its historic churches either. You can also find excellent hiking trails around the town that are definitely worth exploring.

Echternach and its Benedictine Abbey

Echternach is a cozy little town by the German border. It’s the oldest town in Luxembourg and the perfect starting point for those interested in exploring the Mullerthal region. Echternach is famous for its laid-back atmosphere, medieval old-town centre and narrow streets. Don’t muss the 16th century town hall and the market square. Echternach is one of the best family destinations in Luxembourg. There are many sports and leisure facilities by the artificial lake of Eternach.

However, Echternach is most famous for its beautiful Benedictine Abbey, which was founded by a Northumbrian monk in the 7th century. It consists of four buildings with a central courtyard and contains a crypt with a beautifully decorated sarcophagus of St. Willibrord. The cellars of the former abbey are nowadays home to the Museum of the Abbey. Here you can learn about the history of the Benedictine monastery in the city.

Where to stay in Luxembourg?

The Grand Hotel Cravat is one of the best hotels in Luxembourg City. Especially if you are looking for a high-quality hotel at affordable rates right in the heart of Luxembourg. Most sights are within a very short walking distance. Rates are starting at 140 Euro. Check the prices for your dates here.

Why not extend your trip to Luxembourg with a visit to Germany? Check out the most charming cities in Germany here!

Pin this post for later by clicking on the image below 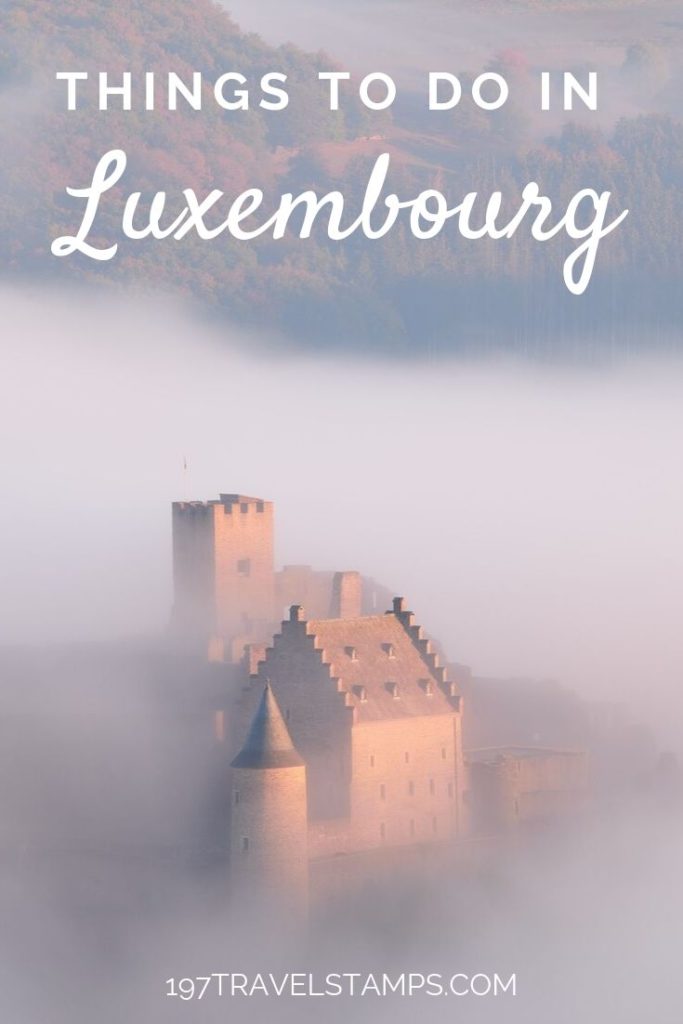 The best places to visit in Luxembourg