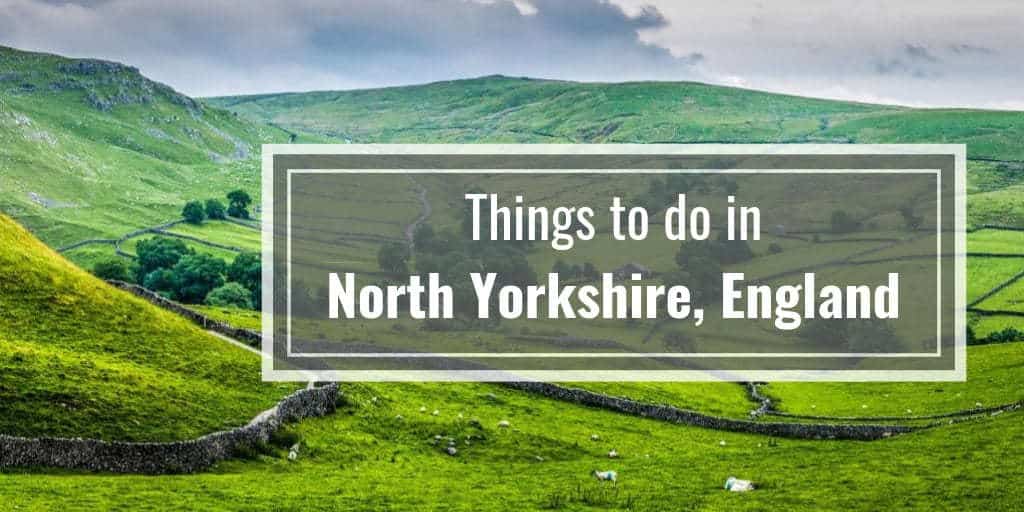 No Comments on Best Things To Do in North YorkshirePosted in England, Europe By 197travelstampsPosted on April 10, 2019November 3, 2019

Yorkshire is England’s largest county and is divided into the four districts of North, South, West Yorkshire and East Riding of Yorkshire. Its beautiful, natural scenery earned Yorkshire the nickname ‘God’s Own Country’. And North Yorkshire plays a major part in this much-deserved title. With its rolling hills and river valleys of the Yorkshire Dales, the barren moorlands of the North York Moors and the dramatic Jurassic coastline of the North York’s Coast. Today, our guest blogger Sinead Camplin is telling us about the best things to do in North Yorkshire

Best Things to do in North Yorkshire

The City of York

Any visit to North Yorkshire should begin in the old city of York. You can spend just a few hours or entire weekend in York to explore diverse and rich cultural heritage. In this one city, you can visit buildings and ruins from the Roman, Viking, Georgian and Victorian eras. York is a compact city easily explored on foot. Once your feet get tired, take a well-earned break in one of York’s 365 pubs! One of these pubs, the Roman Bath, has the ruins of an actual Roman bath underneath it. Descend the stairs inside the pub and take a look!

Things to see in York

York Minster is an ornate Gothic cathedral that dominates the city skyline. No building in York is allowed to be taller than York Minster. Explore the beautifully decorated nave and chapter house and learn about the largest expanse of stained glass windows in the U.K. Make the challenging climb up the Minster’s central tower for an incredible view of the city. If possible, try to attend a service or Evensong to hear the incredible organ and the Minster choir.

Walk The Wall of York

Imposing 14th century walls encircle the city of York. You can access it by four, grand medieval gateways called Bars. The walls are two miles long and are the longest city walls in England. The walls are free to enter and walk and give picture postcard views of the city.

The UK is a great country to get started for beginner travelers. There will be no language barrier holding you back and the infrastructure is well-developed.

This short, atmospheric cobbled street served as inspiration for Diagon Alley in the Harry Potter series. Try to visit early in the day as it gets crowded during the daytime! In mediaeval times, The Shambles was full of butchers shops and today you can still see the meat hooks hanging above the ledges where the raw meat was once displayed.

Clifford’s Tower is a rotund, open tower on the top of a small artificial hill at the southern end of the city. It is the remains of a Norman castle or ‘keep’. You can access the tower by a very steep set of stairs, followed by further steps to reach the top of the tower. The fantastic 360-degree view of York is worth all the steps!

There are museums to suit every interest in York. Anthropology fans should visit York Castle Museum, famous for its life size recreation of a  Victorian shopping street complete with shops and shopkeepers. Chocolate lovers can discover the history of chocolate making in York at York Chocolate Story. Or learn about Viking York at one of the city’s most visited tourist attractions, the Jorvik Viking Centre.

The newly revamped York Art Gallery is one of the best things to do in York for art lovers. Not only does it have a fascinating collection of paintings and ceramics from the last 500 years but it is housed in a gorgeous building too!

Check out this post for some more things to do in York.

There are the usual free walking tours and sightseeing buses in York but for something different, join an evening ghost tour. These cheap, two hour walking tours run every evening visiting the most haunted locations in York. An engaging guide will tell you horrifying but entertaining tales of how people lived and died in York. If you don’t want to walk, you can take a nighttime ghost bus tour on a black traditional routemaster bus.

Hike in the North Yorkshire Dales

A challenging walk for experienced hikers would be to conquer one of the Yorkshire Three Peaks of Ingleborough, Whernside and Pen-y-ghent. A much easier walk is climbing the steep steps to the top of the rocky amphitheatre at Malham Cove. The view from the top of Malham Cove is my favourite view in the Dales.

Castles and Abbeys in North Yorkshire

History fans can visit the ruins of Bolton Abbey or Fountains Abbey. Both of them are set in expansive, landscaped grounds. If you don’t want to drive too far from York, Castle Howard is one of the best places to visit near York, if you are looking for some medieval inspiration. The castle has featured in numerous films and TV-programs.

Explore some of Yorkshires extensive underground cave system at the caves of Stump Cross Caverns or White Scar Caves which is the longest show cave in England. Or go off the beaten track and challenge yourself with a pre booked adventurous caving trip at Studfold Activity Centre.

And after a long day of hiking, enjoy a pint of beer at England’s highest pub, the remote Tan HilI Inn.

The Yorkshire Moors is a wild, heather covered landscape with scenic walks to suit all ages and abilities. My favorite walk in the North York Moors is at The Hole of Horcum, a circular walk around a huge natural amphitheater over 400 feet deep. Or climb up the side of the huge, painted stone ‘White Horse’ near Kilburn for one of Northern Yorkshire’s best views from the top of blustery Sutton Bank. On a fine day, tackle the landmark peak of Roseberry Topping, one of the best places to visit in Yorkshire. It is a popular walk but the views will be worth it!

You can explore the Moors by a hop on, hop off steam train ride from Pickering to Goathland. You may know the Pretty Goathland Station as Hogsmeade Station in the Harry Potter movies.

Visit the pretty market town of Helmsley and its surrounding attractions of Helmsley Castle, Rievaulx Abbey ruins and Rievaulx Terraces.

Get active and spend a day at Dalby Forest. This extensive woodland on the southern edge of the North York Moors National Park has 4 running trails, 13 walks and a brilliant treetop rope trail. Alternatively, you can hire a mountain bike and challenge yourself on one the six-mountain bike tracks.

Relax at the North Yorkshire Coast

There is something for everyone along this stretch of Jurassic coastline. The most popular locations are the seaside holiday hotspots of Scarborough and Whitby. The scenery here reminded me a lot of our trip to Northern Ireland.

Whitby is a compact, pretty town overlooked from a clifftop by the ruins of Whitby Abbey. Whitby retains an old fishing town charm and is famous for being Dracula’s landing place in Bram Stoker’s classic novel and the birthplace of the explorer Captain Cook. For a great view of the Whitby, climb the muscle-burning 199 stone steps to the top of the town.

Anyone seeking a quieter, less visited coastal location should visit the small towns further along the coast. Search for fossils at Ravenscar Beach or go bird watching at dramatic Flamborough Head particularly during the puffin breeding season.

Surfing enthusiasts can have a go at the sport at windy Cayton Bay but as it is the North Sea so you will definitely need a wetsuit!

One of the best places on the North York coast is the quaint fishing village of Robin Hoods Bay and its smaller, less visited neighbor Staithes. Both villages are a maze of narrow, steeply sloping cobbled streets lined with tiny characterful cottages. In any of these coastal villages and towns, enjoy the classic British takeaway of fish and chips.

There are so many fun, diverse things to do in North Yorkshire that you will never fit it all in on one visit. Many who visit Yorkshire stay – perhaps you will too!

Best Things To Do in North Yorkshire