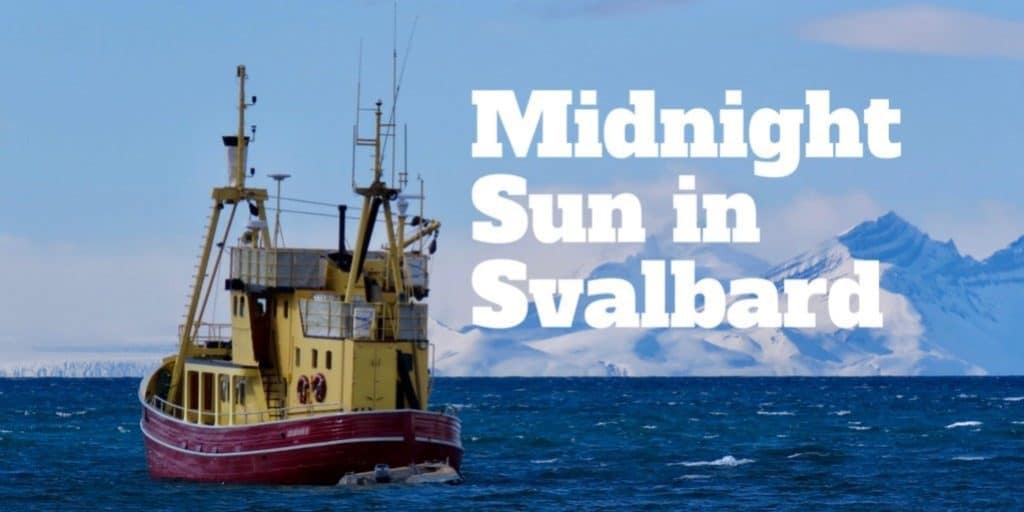 6 Comments on The Midnight Sun in Svalbard – A Weekend Without SunsetPosted in Europe, Norway By 197travelstampsPosted on July 9, 2018October 20, 2019Tagged arctic, midnight sun, polar

I like visiting obscure places. Places most people have never heard of. One very special off-the-beaten-track place is the Norwegian archipelago Svalbard. While Norway doesn’t sound so exotic at first, Svalbard is different. The group of islands is located nearly 1,000 kms (600 miles) north of the Norwegian mainland in the Arctic Circle. During the summer months, the sun doesn’t set on Svalbard for four consecutive months.

In winter, a long polar night leaves the islanders without daylight for a similar amount of time. A couple of weeks ago, we visited Spitsbergen, the largest island of Svalbard for a weekend during the Polar summer.

Svalbard midnight sun – no sunset for an entire weekend

Our trip to Longyearbyen, the largest settlement in Svalbard started with a minor delay on a Friday night from Oslo airport. Minutes before midnight, the sun was about to disappear on the horizon. As we took off and our plane headed north, the sun kept climbing higher and higher again.

Read more about the best things to do in Oslo.

The later in the night it got, the brighter to night sky became. By the time we landed at Longyearbyen airport in the middle of the night just after 2 am, the sun was shining down on us. How weird.

What to do in Svalbard?

During our trip to Spitsbergen, not all things turned out quite the way we had planned. For day one, we had booked an ATV tour of the island. This was supposed to be a great way to get out of town and experience the incredible beauty of the Arctic – and maybe see a polar bear.
Unfortunately, our tour got cancelled on a very short notice. Since there we no decent replacements on that Saturday, we decided to move the ATV tour to Sunday and use day one to explore Longyearbyen on foot.

Traveling to Spitsbergen with kids? Check out this post for the best activities.

How cold is Svalbard?

Going to the Arctic Circle sounds crazy. We packed plenty of warm clothes, scarves, gloves etc. Actually, the temperature was quite constant at around 0°C (32 °F) during the weekend we visited. So it wasn’t too bad at all. With our warm clothes, we could easily stay outside for an extended long time without getting too cold. Good thing the sun was up for 24 hours a day to keep us warm.

Norway is one of the most expensive countries on earth and Svalbard is one of the most remote parts of Norway and the entire world. So yes, Svalbard is quite expensive but it was actually not as crazy as we expected it to be. Thanks to the special administrative status within Norway, there is no value added tax in Svalbard. This keeps the prices at acceptable levels.
The most pleasant surprise were the prices of alcoholic beverages. A pint of beer in one of the two local pubs in Longyearbyen was around €5. The price level was similar as in the Faroe Islands, another remote group of islands in Europe.
Due to the size of Spitsbergen, taxi prices seem horrendous if you consider the distance. The 7 km (5 mi) ride from the airport into town at night was nearly €40. If you consider that you may encounter hungry polar bears on the way if you decide to walk, the price doesn’t seem too bad after all.

Can you identify the Norwegian flag in the photo above? Check out our hard flag quiz or our European flags quiz to test your flag knowledge.

Tourism is one of the main income sources on the archipelago. The arctic summer brings many young seasonal workers and tourists into town. And where there’s affordable beer and plenty of young people, there is a good nightlife scene.
Our Saturday night started with a couple of beers in Svalbar, one of the two pubs in Longyearbyen. The place was packed, a DJ was playing some great music and on top of that, it was karaoke night.

At 2 am, the pub closed and we moved on to a nightclub. Who would have thought an island with 2,700 inhabitants could have such a great nightlife. Since the sun never sets, we didn’t really feel like going to bed at any time.

The next attempt at the ATV tour

Even though Saturday night got a little wild, we still got up the next morning to make our ATV tour. As we approached the receptionist, we could already tell by her look that something wasn’t right. “I’m sorry, the tour got cancelled again. The guide is sick.” Too bad. Even though there are plenty of tourist activities on the islands, all the good tour alternatives had already started earlier in the morning.
So unfortunately, we didn’t get a chance to get outside of Longyearbyen during our time in Svalbard. We used the additional day in town to check out one of the old coalmines close to the settlement. Along the way, we also met some friendly Svalbard reindeer.

In the evening, we passed our time in the Svalbar pub again before taking the flight back to Oslo at 2 am again. What an amazing weekend! Your next read: What to do in the Faroe Islands on a weekend – another secret travel gem within Europe only few people have heard about or had the chance to visit.

The Midnight Sun in Svalbard – A Weekend Without Sunset