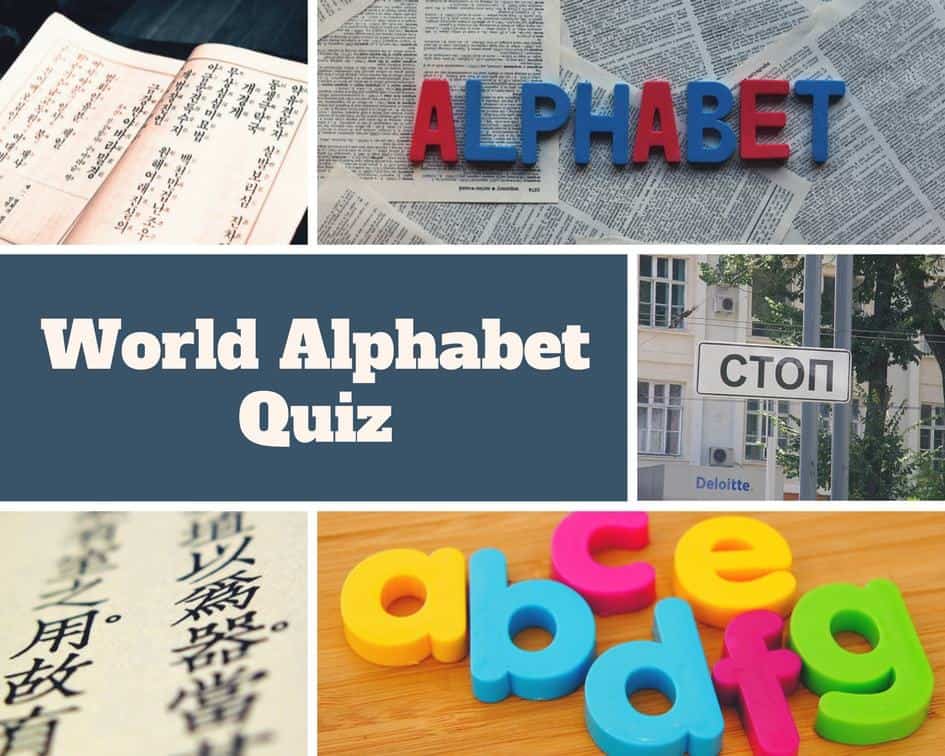 While most people in Western Europe and America use the Latin alphabet, writing in other continents can differ from country to country. There are over 370 writing systems (or scripts) in the world. Test your knowledge about different alphabets of the world in this alphabet quiz.

So let’s get started with the quiz. As usual, you are rewarded with a fun fact for every correct answer. Your final score of this world alphabet quiz will be shown at the end of the quiz once you’ve answered all questions.

What language is written in the following alphabet?

This is Hebrew writing which is used in Israel and among Jewish communities around the world. Did you know that the Hebrew language died out around 200 AD and was revived as a spoken language only in the 19th century.

What language is written in the following script?

This writing system is used in the Korean peninsula and is called Hangul. You may have heard stories about how difficult Asian alphabets are but Korean is different. It is actually possible to learn the Korean alphabet within 90 minutes!

Where in the world can you see this alphabet?

The small country of Georgia in the Caucasus Region doesn't only have one writing system - they actually have three different scripts. That is three different writings for 3.8 Million inhabitants of the country. The one above is the main script of Georgia called Mkhedruli.

In what country in Southeast Asia can you find this writing system?

Correct! This is the Thai writing system. Here is a fun fact for you: Thailand is the only country in Southeast Asia that was never colonized. In the Thai language, Thailand is called the Land of the Free. If you ever find yourself in the capital of Thailand, be sure to check out our guide on the best day trips from Bangkok.

What language is usually written with this writing system?

Hindi is spoken in large parts of Northern India and also in Mauritius, Nepal, Fiji, Guyana, Suriname and Trinidad & Tobago.

In what country (among others) can you find this alphabet?

Even though Cyrillic is widely referred to as the "Russian script", it is also used in many other countries of the former Sovjet Union. The Cyrillic alphabet was actually invented in Bulgaria by two monks called Cyril and Methodius.

In what Asian country is this alphabet officially used?

The Chinese writing system uses different characters for most words. There are more than 100,000 characters in the Chinese language. But, in order to flueantly read the language, you need to know between 3,000 to 6,000 characters. Quite a lot comared to the 26 letters in our Latin alphabet.

In what country is the following alphabet used?

Here is a fun fact: The word "alphabet" is derived from the first two letters of the Greek alphabet "alpha" and "beta".

Where in the world can you find this beautiful writing system?

Here is a fun fact about Myanmar (formerly called Burma): the Burmese lanugage does not use any last names. Hence, it is very hard to tell who is related to whom

In what African country is this alphabet used?

Correct! The script of Ethiopia is called Ge'ez. Did you know that most "African" restaurants in the Western world are actually serving Ethiopian food? Click here to read about my experiences traveling to the Danakil Depression in Northern Ethiopia. I got to see a boiling lava lake and some of the most surreal landscapes in the world

Thank you for playing the world alphabet quiz. How many right answers did you get? Let us know in the comment section

Here is a short summary of the main facts from the quiz: The Korean alphabet can be learned within 90 minutes. In contrary, the Chinese alphabet has over 100,000 characters – of which around 3,000 are necessary to properly read the language. The country of Georgia has three writing systems with a total population of 3.8 million people.

If you want to learn more about the different alphabets (also called writing systems or scripts), follow this overview or this Wikipedia article.