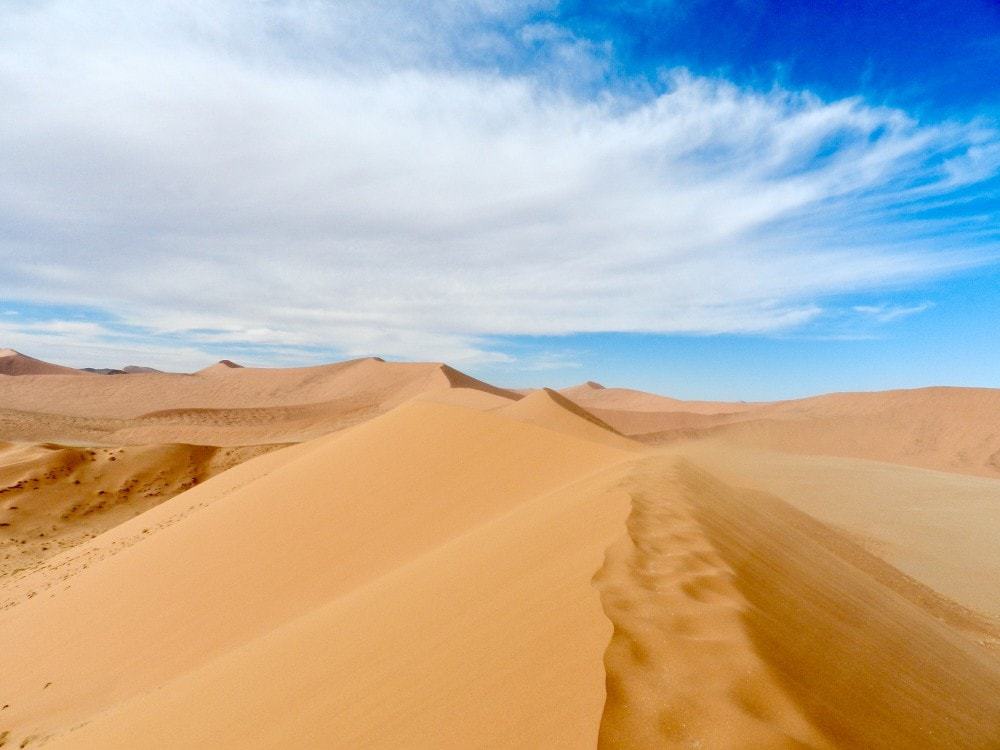 Usually, I do a fair bit of reading and planning before I travel to a new country. But when I prepared my trip to Namibia, I missed one important thing: Of the 44,500 kilometers (27,700 miles) of roads in Namibia, less than 15% are paved. Since we didn’t know that before, we ended up renting a standard 2WD Toyota Yaris and drive hundreds of miles on unpaved roads with it. Stupid, exciting and adventurous. On our adventure through Namibia, we drifted off the road once, drove through rivers on 4WD-only roads and got stuck in the sand of the Namib Desert – and we got to see the incredible beauty of Nambia.

After a good breakfast in the morning we were ready to start exploring the south of Namibia. First, we got some supplies, food and water and then we hit the road: Google Maps told us the drive from Windhoek to Sossusvlei in the Namib Desert would be around 400 km long and would take a bit more than five hours.

But, to our surprise, as soon as we left the city of Windhoek behind us, the paved road stopped and we found ourselves on a gravel road. Initially, we thought that only a short section would be unpaved but after about an hour we started to realize that that was not the case and that we would spend all day rumbling over gravel in our Yaris. All the cars we saw on the road were fully equipped 4WD jeeps. We felt a bit stupid in our tiny car that was absolutely not suitable for the environment. Next time I’ll come better prepared, I told myself.

At some point, however, we realized that even though the Yaris was not adhering well to the gravel surface, we had to drive a little faster than how we started off. At only 50 km/h (30 mph), we wouldn’t make it to the campsite by nightfall – but we didn’t really have any other choice as there was no civilization between us and Sossusvlei. So we started driving faster and faster. At 100 km/h (60 mph), the entire car was vibrating, things started to fall around and communication inside the car was hardly possible due to the rattling noises. At 120 km/h (75 mph), we flew off the road, the car rotated by 360 degrees and we came to a stop somewhere off the road. Everything was quiet for a few moments until we both started laughing out loud at the same time. Thank god there was no tree on the side of the road.

After we continued (still a bit shaky from the near accident), we approached an intersection. The GPS on our phone told us to go left, the road sign said we should turn right. What would you do? We weren’t the same opinion but eventually I prevailed and we turned right. I would rather trust the road sign than the GPS that didn’t seem very reliable in the first place. But I was wrong – very wrong.

While the road was the most direct way to Sossusvlei, we were now on a 4WD road that led us straight over a mountain road which our car was absolutely not built to drive on. But turning back wasn’t really an option either so we kept on driving. Every now and then, we stopped to check the bottom of the car after we hit a stone. On this road, there was no traffic so getting stuck during the midday heat of 40°C (105°F) could be a major problem. We progressed very slowly and at some point there was a small river crossing the road. After checking how deep it would be, we started to slowly drive through it. Bam! We’ve hit something – a huge rock under the car that was scratching its bottom. Since removing the stone wasn’t possible, we had to continue. Skrrreeek – Hertz wouldn’t be happy if they knew what was happening to their cars.

A few minutes later, we made it back to the normal gravel road. What seemed like the worst road possible in the morning was now like driving on soft clouds, compared to the mountain road experience. Another couple of hours later we made it. We got to the campsite at Sossusvlei. Just as we were driving to our designated camping area, our car got stuck in the red sand of the Namib Desert. Apparently, all the other travelers did a better job at planning their trip as we were the only idiots without a 4WD there. And as we started digging out the wheels of our car I could see everyone looking at us thinking how stupid we were. Thankfully, some Germans with a large 4WD campervan helped us dig out the car and eventually pulled us out of the sand.

After a night in the desert, we spent the next day exploring the beauty of Sossusvlei before heading back up north to Walvis Bay.

These are just a few of the photos I took in Sossusvlei. Check out my full article here: Everything you need to know before traveling to Sossusvlei

Another 400 km, another 6 hours on gravel road. The first part of the road was the same as where we came from the day before, the second part was very different. We passed one mountain pass after the other. The scenery on the way was incredible but I couldn’t really focus on it anymore. Every now and then we had to stop after we hit big stones to check on the car.

And there we discovered that our Yaris was leaking some kind of liquid. Immediately, I started picturing getting stuck here, with nobody around. I was sure we were going to die here in the middle of nowhere (or at least end up paying a lot of money for our car to get towed 4 hours from the next town). Despite the leak, we had no other option but to continue driving. We could tell from the color of the liquid that it wasn’t engine oil so it had to be either fuel or cooling liquid. So we kept a close look at the fuel level and the engine heat and took breaks every now and then. And, even though I didn’t really believe in it anymore, we made it to Walvis Bay before nightfall. After the car had cooled down, the leakage stopped and we were able to continue driving the next day. After Walvis Bay, we continued onwards to Swakopmund for some sandboarding before visiting the amazing landscapes at Spitzkoppe and returning to Windhoek. Surprisingly, our car made it the entire way even though the leakage continued.

If you are thinking about taking a trip to Namibia, don’t let this story stop you. Namibia is the 5th safest country in Africa – just make sure to rent a 4WD.

This was definitely one of my most adventurous travel experiences and I was way out of my comfort zone. But experiences like these, where not everything goes according to plan, make traveling so special and exciting. Namibia was one of the most amazing countries I have ever visited but I would recommend anyone traveling there to rent a 4WD. Read this guide on everything you need to know about renting a car in Namibia.

Do you plan to visit Namibia? Check out this ultimate Namibia travel guide to learn about all things to do and how to prepare.

What is your most adventurous travel story? Let me know in the comment section. 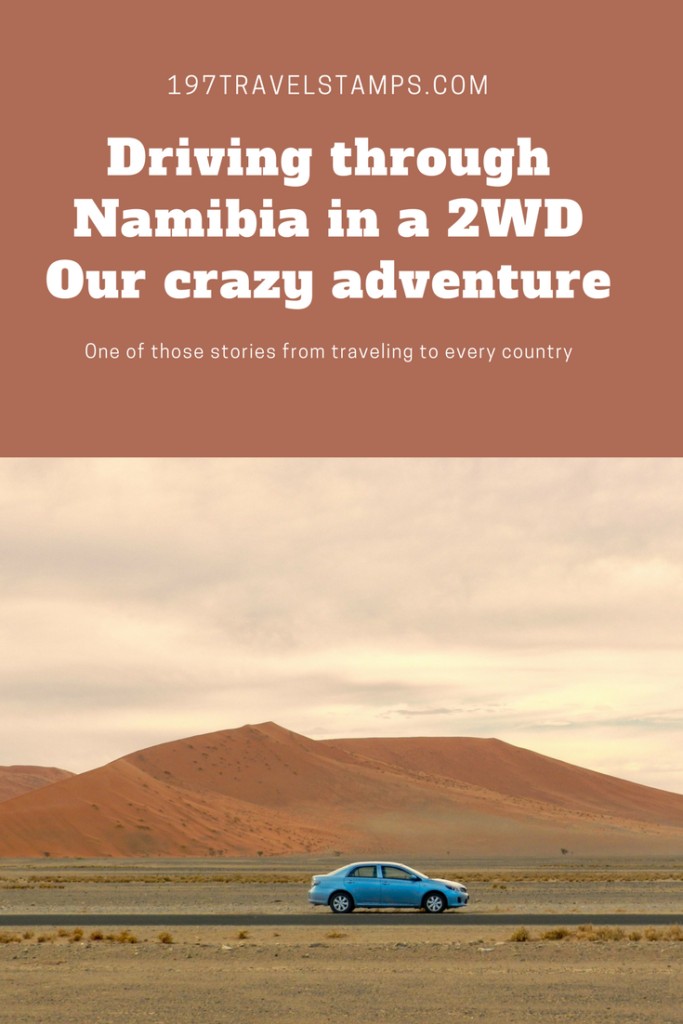